[tps_header]I’ve had the SRAM Rival 1 in for review longer than the folks at SRAM would like. They haven’t officially yelled at me, but I am sure it is coming. Why have I been silent up to this point? I was waiting for something noteworthy to happen, and I am still waiting… I keep turning the pedals and guess what. After months of not cleaning the chain it might be time for a new one.

SRAM has enjoyed great success with 1×11 single-ring drivetrains in the mountain bike world for some years, and it has now developed a road and gravel model. 1×11 for the road is available in Force and Rival groups, both ditch the once-required front derailleur and introduce a rear derailleur with a clutch mechanism and a chainring with wide/narrow teeth, plus a wide-range cassette designed to overcome the obvious shortcomings of losing one chainring.

SRAM isn’t trying to replace a conventional double-ring drivetrain with Rival 1. It’s simply offering different options, and it will probably appeal to some cyclists. Anyone building a gravel, adventure, touring or cyclo-cross bike might be interested (and lots of new cyclo-cross and gravel bikes have shipped in 2016 with this groupset).

My initial concern with 1x drivetrain for all around riding was a lack of gear range but SRAM has solved this, thanks to a rather large rear cassette and a clutched rear derailleur. The new Rival 1 rear derailleur in long cage can shift a massive 42-tooth cassette. Of course, there will be bigger gaps between gears, so a little pedaling efficiency can be lost, but it is not horrible at all; some might say it is a bit of a relief to mix up the cadence after a long day on the bike.  On the trails or riding alone this never seems to be an issue. The only time it really became a concern was around 28 or 29 mph when hanging out with lycra clad roadies. Of course, if you show up on a cross bike they are going to try and put the screws to you.

We put the the SRAM Rival 1 groupset and Zipp Course 30 wheels through some of the worst conditions we could find, and they came out smelling like roses. Mounted on our Moots Psychlo X cross bike, we spent a good 9 months on the road, trails, single track and even a little bike-packing to what damage could be done.

So why no front chain guard?

The crucial features that make SRAM’s Rival 1 drivetrains secure are found in the rear derailleur and the chainring.

The chainring has alternating thick and thin teeth, which grab the chain’s link plates, locking the chain on the ring without any supplementary retention. It seems too simple to work, but so far there have not been any issues of chain drop or suck.

The rear derailleur uses a straight parallelogram that can only move laterally, making it impervious to ghost-shifting in rough terrain, says SRAM, and providing lighter shifting action. The pulley cage has a one-way clutch that damps its forward rotation and reduces chain bounce. Like the chainring, the pulley teeth alternate thick/thin.

Final rundown on the SRAM Rival 1

It works, and it works well. It might not be as light as the Force group and might be missing a little bit of the bling that carbon provides but the Rival 1 will get the job done. In the long run there were absolutely no complaints. The group performed flawlessly.

Usually I like to buy the best that I can afford so my first instinct was to get the Force 1. I mean, why not? It has carbon fiber, it has to be worth the couple of hundred bucks more. After spending so long on the Rival 1, I am not sure that is the case any longer. Sure, if I was racing every weekend then it might be a different story; the few extra grams give me a little better workout on the road and my wallet will even be little heavier!

What would I change? Out of the box the group is great. Depending on where my intentions lie, I would possibly upgrade the rear cassette to something a little light, or maybe use the Rival level cassette for training and a light Force level for special occasions.

Most people take pretty photos before they go out get things dirty but we REALLY wanted to go for a ride. 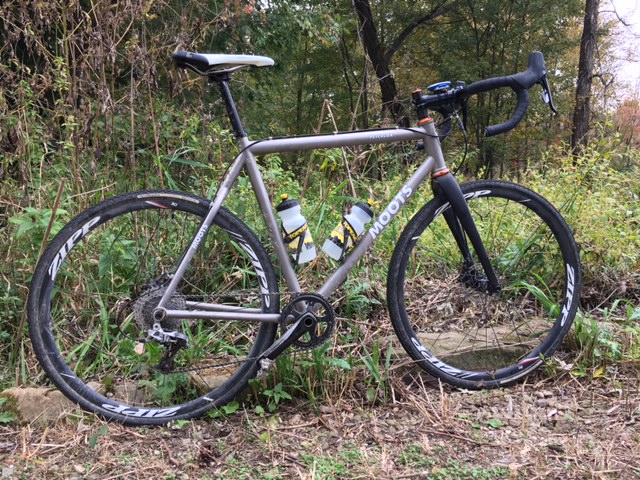 The SRAM Rival 1 will get the job done day in and day out.