To see each state’s ranking, report card and learn more about the data used for the ranking please visit the following links:

According to Ken McLeod, Policy Director for the League, “2016 proved an ideal time to re-examine and improve the Bicycle Friendly State program. With the passage of the Fixing America’s Surface Transportation (FAST) Act in late 2015, it was important to ensure that our Bicycle Friendly State ranking process reflected current federal funding laws and provided a strong basis for state improvements now that federal transportation funding was set until 2020.  By working with our stakeholders at state Departments of Transportation and statewide advocacy associations, the 2017 Bicycle Friendly State ranking provides a new level of transparency for policy and programmatic comparisons between states. Our hope is that this ranking will provide important feedback and competition for states as they adjust to the FAST Act and pursue innovative bicycling-related actions that will inform future federal policy.” 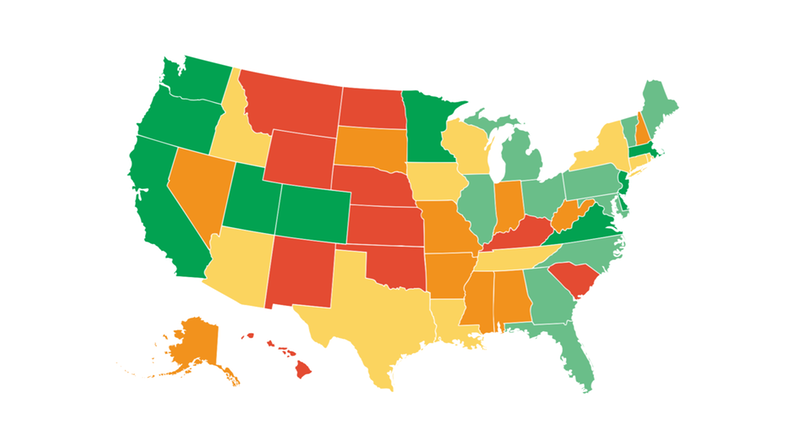 Washington led the state rankings, as it has each year since 2008, while Minnesota comes in again at second. In this latest ranking, California moved up from eighth to third on the strength of its new statewide bike plan. Virginia makes its first appearance in the top 10 in 10th place. Two states made their way to the top 20 for the first time: Vermont (14th) and Georgia (19th).

The League launched its Bicycle Friendly State program in 2008 in order to better understand state efforts related to bicycling and provide a comparative framework that allows states to easily identify areas of improvement. Through our ranking, we hope that states and the public can easily understand the relative strengths and weaknesses of each state’s efforts related to bicycling. Most of the League’s focus is on the behavior of state Departments of Transportation and state legislators. These two groups are powerful policymakers and implementers who have significant impacts on conditions for bicyclists in each state.

The Bicycle Friendly State ranking seeks to rank each state according to its current conditions and efforts related to bicycling. Each state receives a report card that showcases:

The Bicycle Friendly State ranking is based upon data drawn from several data sources:

To learn more about the data on each Bicycle Friendly State Report Card, please reference this Guide that describes the data sources, calculations, and surveys used to create the report cards and rankings. The Guide as well as charts and maps that illustrate the data used to develop the 2017 Bicycle Friendly State rankings can be found by following this link.

About the Bicycle Friendly America℠ Program

The League of American Bicyclists is leading the movement to create a Bicycle Friendly America for everyone. As leaders, our commitment is to listen and learn, define standards and share best practices to engage diverse communities and build a powerful, unified voice for change.