At ACTIVE, they have access to insights gleaned from millions of registrations around the world. We recently evaluated registration data from 125,000 endurance industry events across more than 16,000 organizations managed by ACTIVE software in 2015 to better understand endurance event popularity within each state in the US. Whether its health initiatives or fun events, the top markets for endurance event participation may surprise you, ranked from highest to lowest per capita: 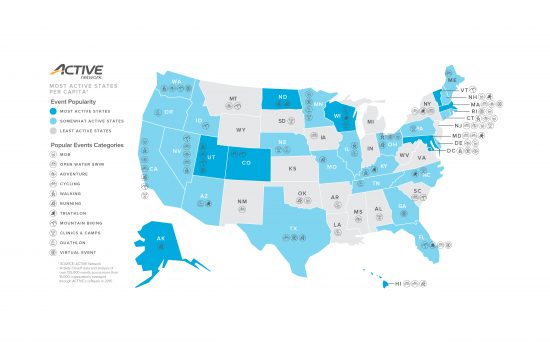 Is weather a factor?

Based on ACTIVE’s data, Nine of the top 10 most active states and 15 of the 23 somewhat active states are known to have harsh winters and temperate summers. Milder summers may play into the increased participation rate of these more northern regions. The prevalence of themed holiday runs and/or the tendency of extreme athletes to be undeterred by winter conditions could also bump those states to higher participation rates. However, Texas ranks high for summer heat, when many endurance events are held, yet still comes in as the 14th most active state, perhaps due in part, to milder winters.

Is region a factor?

Is overall healthiness a factor?

The United Health Foundation1, along with the American Public Health Association, came up with the top 10 healthiest states at the end of 2015, factoring in “a range of statistics on behaviors and health outcomes, such as smoking, binge drinking, drug deaths, obesity, physical inactivity, infant mortality, and cancer and cardiovascular deaths. It also ties in immunization rates, crime, air pollution, the prevalence of people without health insurance, mental health and other measures to come up with a weighted nationwide ranking.” All 10 of the healthiest states correlate to the most active states (50%) and the somewhat most active states (50%), based on ACTIVE’s data, suggesting that  endurance events encourage sustained physical activity and thus improve overall health.

Founder of Ohio Outside and still runs the day to day operations, working events, gathering articles, doing product reviews, training for races, sampling great beers and even has the honor of picking up after Emma Doodles. He claims his life life could not be any better. His favorite race is the 24 Hours of Canaan and he loves to split his time between mountain biking and trail running. Former Team USA Duathlon Member, Elite Mountain Biker and Triathlete.

Winter Park and Other Colorado Travel Destinations Open Up
June 24, 2020

Open
Looking for an outdoor adventure with trails, fun,

Open
Clean up your gear with @tubotowels cycling wipes.

Open
Doing double time with a workout on @gozwift and a

Open
A cold morning out there (7 in NE Ohio). Are you w

Open
Time to start thinking about the weekend or are we