340 miles across the Eastern Continental Divide

Wednesday morning I set off from downtown Pittsburgh with an itinerary that included traveling the Greater Allegheny Passage Trail to Washington, DC, connecting to the C&O Trail in Cumberland, MD and arriving at Enterprise Rent-A-Car outside of Washington, D.C. by 6:00 PM on Friday. I had a couple of concerns about this trip and the first was being my fitness, the 2nd was getting to my rental car by 6 PM and last was climbing over the Eastern Continental Divide with only one front chainring.

10 AM: I left Downtown Pittsburgh and headed east (well maybe it was south) only to get lost around mile three amidst the city’s construction. Once back on course, the the first 20 miles were pretty uneventful riding a paved trail along rail yards and baking in the heat. After covering a boring 20 miles, the trail took a sharp right and I saw, quite possibly, the steepest hill I would climb over the next three days. I dropped down to the the 36 in the rear and was all set. This was the last of any steep climb and the rest was smooth sailing. Over the next 90 or so miles I think I used 3 or 4 cogs on terrain that included pretty much crushed limestone trails and was either flat or climbing at a steady grade. Although the day was long and included a massive bonk with 15 miles to go, I rewarded myself with a large pizza with the works. Since I was not packing a stove and food, I lucked out that there was a pizza joint across the river! A full belly and time to get a little shut eye.

All packed up and ready to hit the trail. Luckily that pizza joint across the river also served breakfast, so I rolled across the bridge and fueled up for the long day. With another 100 plus mile day ahead of me and the final climb up to the Eastern Continental Divide, I took it somewhat easy not knowing what was in store.  After chasing a few Guinea hens hanging out on the trail, the next point of interest was the Big Savage Tunnel and the Eastern Continental Divide, the highest point on the trail which was followed by a 25 mile descent into Cumberland. I had been pretty much going up hill for the last day and half was really looking forward to switching that up with a little downhill action. Luckily there were a few people on the divide to take a picture, and it was also fun to hear their reaction when I said I was riding the trail in 3 days.

After a few selfies and updating Facebook, I was was off to give the Rival HDR brakes a run for their money. 180lbs of little ol’ me plus bags, bottles and whatever else I set off down the 25 mile descent into Baltimore in search of some lunch. I was NOT going to make the mistake of not eating enough like I did yesterday. According to my Garmin, I later found out this was just a little over 70 minutes of descending and what seems to be a road crossing every 10 minutes. My HDR Brakes got me there safely.

A turn for the better … well if you like double track and mud, then it was definitely a turn for the better. Once leaving the GAP trail I hopped on the C&O trail for part 2 of the journey from Cumberland to Washington DC. The trail was quite a bit different, I was out of the cooler  climates of the mountains and on a trail that was muddy, humid and not quite as scenic. 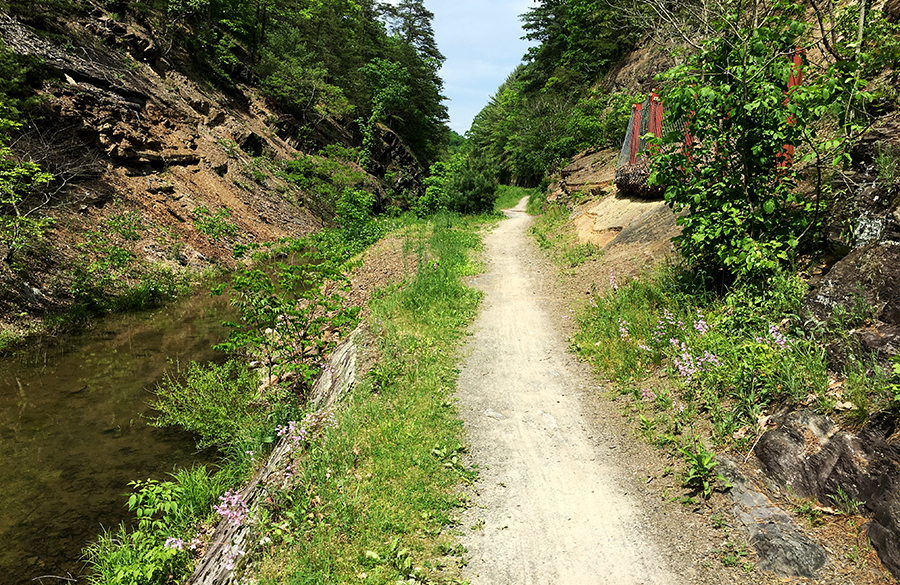 The plan was to arrive in DC, cross the river to Alexandria, and get to Enterprise by 6PM, in order to drive to Downingtown, Pennsylvania and meet the family at one of Downingtown’s best breweries, Victory Brewing Company. A little worried the rental car location would be closed by the time I rolled in, I decided to leave around 5AM and ride the first hour in the dark, which really sucked since my rear was sore and I felt every bump but couldn’t see them to stand up.

In theory, this ride is a all downhill but that is kind of a myth. It’s really pancake flat, except when you come to a lock along the canal or a major drop next to the Potomac River. No coasting today, just constant pedaling. Three hours into my ride, I put my Garmin into my jersey pocket when I realized I was just looking at it counting the miles.  At one point, I was counting down to the tenths. I was thinking about the 6PM cut off as I was only averaging 11 or 12 mph through the mud and dirt.

The final push for DC went pretty smooth. With about 60 miles to go, I ventured off course to drop into a small town and grab some food. Lesson learned, just because the sign says a town is two miles away does not mean it has a single store in it. Later down the trail, I found a railroad bridge crossing into Harper’s Ferry. Food and a quick iPhone charge and the next stop was DC.

Welcome to Washington DC! I snap a few pictures from mile marker “0” and my phone dies. “SHIT!!”  Where is the rental car place? How do I get there? “Plan B” comes into effect. Follow the incoming airplanes to Reagan International Airport and grab a car there. With planes coming in every 5 minutes it seemed, this can not be that difficult. Easier said than done. Finally, using creative thinking, I made it to the rental car place with 30 minutes to spare.

My SRAM Rival 1 was flawless for the trip and the gear ratios worked out perfect. At the end of the 3 days I could not of asked for a better performing group. Thanks SRAM !!

The SRAM Rival 1 is great on gravel roads, the open road and multipurpose trails but don’t limit it to that. Originally, I was a little concerned about the lack of gear options on the Rival 1 setup, but at the end of the day it gets the job done. From riding single track to sprinting with lycra clad roadies for city limit signs the 1x setup works.*

* Show up for a road ride on a 1x cross bike and it is an open invitation for people to try and put the screws to you. #GAMEON